This is a Q&A with Peg Alford Pursell.

Is your forthcoming book your first full book length work?

Show Her a Flower, A Bird, A Shadow is my first book. A slender v

olume at 70 pages, but, as noted by Antonya Nelson, slim only in number of pages. The book is a collection of flash fiction and hybrid prose written over a period of years. The writing process for this book involved distinct methods, in composing and refining individual pieces and in arranging those parts into the whole.

My approach to writing very short prose is varied. Sometimes it’s a matter of distilling a much longer story into one substantially shorter in length than the original, through a process of culling and refinement again and again until I’m satisfied that the story can’t be any further pared away at without consequence. I enjoy that challenge of crystallization, which involves thinking deeply about the reader, imagining what she may fill in with her intelligence, intuition, and empathic imagination and invention.

Other times the writing begins at a certain point and builds itself into the “miniature” architecture. The certain point might be an image that captures my attention, such as a hole in a beautifully hand knit pair of vibrant socks or a bright green packet of a tea bag. (From jotting down this note, I see that color may often figure into such an image.) Another certain point might be the sound of a phrase, such as “petal, feather, particle.” The sound of language is very important to me and often guides my writing both in composition and revision.

Arranging the parts into the whole was an entirely different process from writing the individual pieces, one I compare to assembling a mosaic, the similarity being in placing pieces together to make something that is its own artful creation. Assembling the book in this way was an illuminating experience, as I moved pieces around, placing them to juxtapose with one another or in order to enlarge on an element or theme. Though I’m fairly familiar with my obsessions in writing, through this exploration I discovered new facets to what I’d written, such as previously obscured correspondences, for example. These discoveries and surprises made me eager to work in this way again, and another book is on the horizon.

Overall, what is your writing process/schedule? How do you manage writing with all your other work/projects?

My writing process and schedule have changed over the past year since I began WTAW Press and since “Show Her a Flower” has arrived in the world. I still set my alarm for 5 a.m. to try to maintain a daily schedule of writing first thing, though the length of these writing sessions has dramatically shortened. But I’ve learned from experience that I need to take care of my own needs in this way if I’m to be the advocate for other writers and so I’m sticking to the first thing in the morning routine for now. I’ll be scheduling in a writing retreat in the coming months so that I can immerse myself more fully in the manuscripts underway that are crying out for my attention.

You’re also a director of an independent publisher, what does that entail?

My formal title is Director of WTAW Press, which is a way of saying that I oversee everything for this nonprofit independent publisher of books. I founded the press, which has its roots in the literary reading series I founded seven years ago in the Bay Area, Why There Are Words, that this year expanded nationally to five other cities in the U.S. (New York City, Los Angeles, Pittsburgh, Austin, and Portland), and I’m the editor, and I wear many other essential hats as well.

What kind of work does WTAW Press do?

WTAW Press publishes full-length books of prose, novels, memoirs, collections of stories or of essays, creative nonfiction –really, nearly everything other than poetry (though the day of publishing poetry isn’t far off) and translations. Additionally, we publish excerpts of full-length prose manuscripts in our WTAW Press Features Chapbook Series. The limited-run chapbooks are published in time for the annual AWP Conference in order to give more support and visibility to their authors.

Could you explain more about what publishing is like as a job? What does it ‘take’ to get to be a director of a publisher? What is the day by day work like? What’s the best part? What challenges do you face? 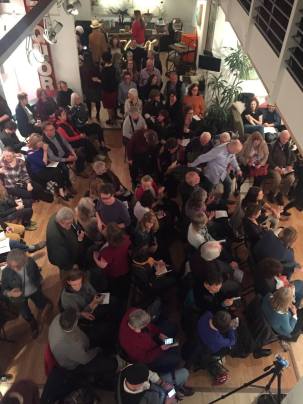 Publishing exceptional books is a consuming but wonderful job. I’m not sure about the career path for becoming a director at a small publishing house elsewhere. As I mentioned, in my case, I started and developed Why There Are Words and WTAW Press, a nonprofit.

The day to day involves covering a variety of jobs, from editorial work to publicity to administrative to fund-raising to you name it. The joys include reading works that open my eyes and my heart in ways I couldn’t have imagined, that I carry with me; interacting with authors who’ve written books that I can’t wait to get into the hands of readers; dreaming about the future of WTAW Press.

Being a writer and a publisher, what different depth of understanding do you have? Does that change how you work in either ‘world’?

The beauty of being an independent publisher is that I’m publishing books that I feel will move others as they have moved me without basing my decisions on the bottom line, i.e. how can WTAW best profit. Which is not to say that I don’t want WTAW Press to thrive; I most certainly do—I’d like to be able to hire help, which would in turn mean that I could publish more authors. I have a good understanding of what kind of work will be published in those houses that have to focus on the bottom line, and I’m glad that I don’t have to be tied to such constraints.

As a writer I know that there are other independent publishers who are also able to publish books that they want to get into the hands of readers, that they believe in, and so as a writer I don’t worry too much about anything other than making my work the best that I can. My editing and publishing work for WTAW Press helps me immensely with my own work, helping me see how to enliven or deepen my writing. That said, if you could see my reading copy of my published book—I’ve edited and revised nearly everything in it as I’ve read from it, and I expect that won’t change, that I’ll continually alter the text as I go along. And likewise with my next book. So it will go.

Peg Alford Pursell is the author of Show Her a Flower, A Bird, A Shadow (ELJ Editions, March 2017), a collection of flash fiction and hybrid prose. Her work has been published in  Forklift Ohio, VOLT, The Journal of Compressed Arts, The Cortland Review, RHINO, Permafrost, Eleven Eleven,The Los Angeles Review, Joyland Magazine,Your Impossible Voice, and many others. She is the director of Why There Are Words, a national neighborhood of literary readings she founded in Sausalito in 2010, and of WTAW Press, an independent publisher of literary books. She lives in Northern California. Visit her on her website.